The Vision Council of America estimates that about 75% of the country uses some form of vision correction.

That means more men than not have at least faced the possibility of wearing glasses — and that’s not counting people who’ve considered “vanity” frames with non-corrective lenses.

This infrequently discussed topic is relevant to most of us.

Even if your goal is to minimize the effect of your glasses entirely and select the most unobtrusive frames possible, you’re going to need to think about what kinds of shapes blend in with your face and features and what kinds stand out.

And for the man who uses his glasses as an active piece of the fashion ensemble — which we recommend — there’s even more to think about.

Should A Man’s Glasses Be Noticeable? 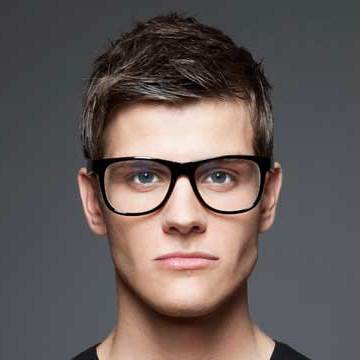 There’s a traditional school of thought that says glasses should be unobtrusive. The thinnest wire frames possible try to make the glasses vanish into your face and remove them from the visual impression altogether.

The problem is that that’s not really possible — you just become a man in thin glasses. That may not be the best look for every man’s face.

On some, it may even take a strong profile and make it look less striking. More modern fashions have embraced the idea of glasses as an expression of style the same as a necktie or a pocket square.

Shape and even color of frames can become a part of your visual identity. And for most men that’s going to be the right choice — though like any accessory, it’s important to keep the glasses in their place.

They should complement your style, not define it. A pair of glasses that’s the most memorable thing about it risks becoming a novelty rather than a stylish accent. So exercise some restraint.

Here’s the basic rule for the shape of your glasses — figure out what your face is lacking, and get frames that provide it. If you have a very angular face with lots of lines and planes, you want rounded glasses to add some curves in there. If you have a soft face with curving features, you’ll do better in straight or angled glasses. That’s the basic paradigm.

Within it, there are some basic dos and don’ts for the various shapes we see faces in:

1. Glasses For A Round-Shaped Face

To really be considered “round” a face needs to be about the same width and height, with a curving chin and cheeks. Something angular and slimming is your best look for a round face. Flat, rectangular lenses will make your face appear longer and thinner, particularly if they sit high on your face.

A little bit of a “butterfly” taper — where the edges of the lenses closest to your nose are shorter than the outer edges — can work, but the corners should be squared off rather than rounded. Thick frames look a little clunky on a round face, so keep the actual material thin.

2. Glasses For A Square-Shaped Face 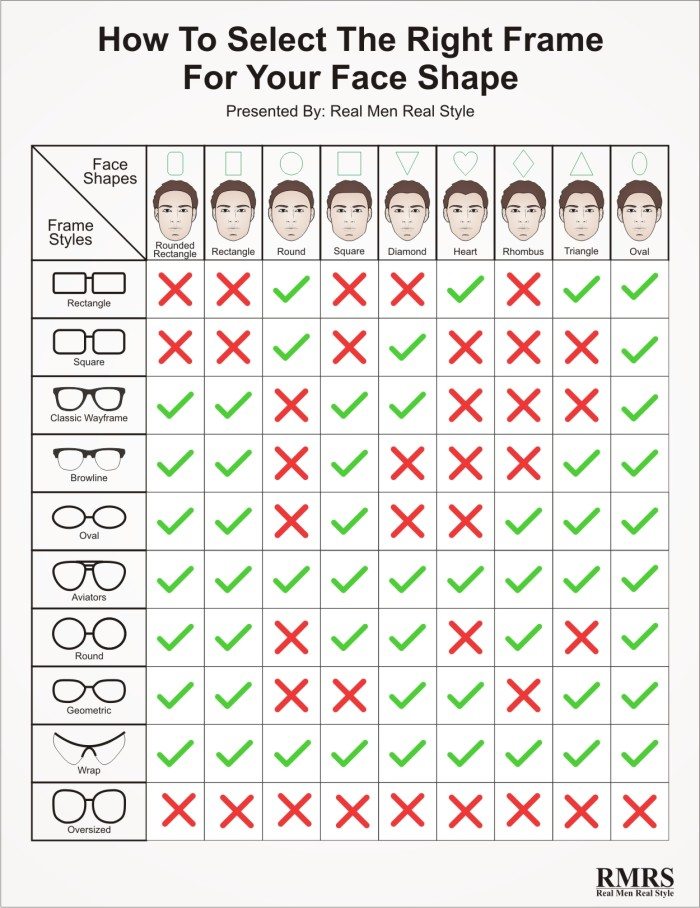 A square face is similar to a round face in that it’s about equal in width and height.

The features are more angled, with a broad chin and strong jaw squaring the shape off.

Men who want to soften their impression up a little can wear rounded lenses.

If you like the strong profile and don’t want glasses to make you look imposing, squared-off shapes can still work, but be sure the lenses are large and about even in height and width.

Narrow, rectangular lenses on a broad, square face will make you look like you have a permanent squint rather than a steely-eyed determination.

The frames should stay slim — thick, dark frames give a square face an overpowering impression that will draw away from the rest of your appearance.

3. Glasses For An Oval Face

Oval faces are the universal blood type of eyewear. They work well with most styles as long as you avoid the extremes. An oval face is taller than it is wide, with a rounded chin and high cheekbones, and it can wear either squared-off frames or curving ones.

The lenses can be narrow or wide, though too square or circular a lens (where the height and width are close to the same) may look a little clunky for your narrow face. A thicker frame can add definition to your face — just be careful not to get anything so heavy that it overpowers your actual features.

4. Glasses For A Heart-Shaped Face

Narrow cheekbones and a small chin look very pretty in photos, but they’re sort of a pain to fit glasses for. You can take a lot of the emphasis off a pointed chin by wearing lenses that are wider at the top than the bottom. A butterfly taper to the sides can help as well by bringing the attention in toward the center of your face.

Stay away from anything too blocky or squared-off — it won’t work with the curves in your face’s shape. Ultra-narrow frames may look a little wimpy on a heart-shaped face, so don’t be shy about a thicker wire or plastic.